BIRMINGHAM, Ala., May 14, 2019 /PRNewswire/ — B.A.S.S., which introduced the catch-and-release ethic to bass fishing nearly 50 years ago, has partnered with Yamaha to enhance both freshwater and saltwater fisheries. 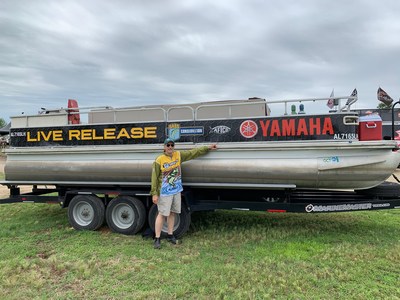 As the official motor sponsor for B.A.S.S. Conservation, Yamaha is providing 115-horsepower Yamaha outboards for all four of the B.A.S.S. Live Release Boats, which are used to return bass safely to their home waters after tournament weigh-ins.

In addition, the two companies will work closely together on many conservation projects affecting freshwater and saltwater initiatives, including advocating for scientific fishery management, protecting and enhancing fish habitat, securing access to public waters and educating anglers on techniques to maximize the survival of released fish.

«We have a long record of leadership in resource conservation,» said Martin Peters, Yamaha Marine senior manager, Government Relations. «That’s why we are proud to be the official conservation partner of B.A.S.S. We are dedicated to protecting fisheries for future generations, and we look forward to attacking the growing problem of invasive species in our rivers and lakes.

«The North American Model of Wildlife Conservation says that our fish and wildlife belong to all Americans and should be managed in such a way that they will be available forever. Yamaha believes in this model and is the only outboard manufacturer with a published code of ethics by which all Yamaha employees and pro anglers abide.»

«Yamaha and B.A.S.S. have a parallel conservation vision,» said Gene Gilliland, national conservation director for B.A.S.S. «We both understand that clean water and healthy fisheries are vital to the future of bass fishing. Their track record of success in saltwater fisheries policy is very impressive, and we hope to leverage that success when we are battling threats to freshwater recreational fishing, as well.»

Yamaha has been active in campaigns to protect sportfishing in saltwater fisheries, including opposing the expansion of longline fishing off the east coast of Florida and supporting legislation to phase out the use of large-mesh drift gillnets along the California coast, he noted.

«In addition to working with state and federal agencies on fishery policy, we hope to engage our more than 500,000 B.A.S.S. members in grassroots efforts that address local issues — and encourage those anglers to become advocates for our conservation vision in the political arena,» Gilliland said.