Gray And Raycom To Combine In A $3.6 Billion Transaction

ATLANTA and MONTGOMERY, Ala., June 25, 2018 /PRNewswire/ — Gray Television, Inc. («Gray«) (NYSE: GTN and GTN.A) and Raycom Media, Inc. («Raycom«), an employee-owned company, jointly announced today that they have entered into an agreement to combine their companies in a transformative transaction that will create the single largest owner of top-rated local television stations and digital assets in the country.

This transaction marks Gray’s transformation from a small, regional broadcaster into a leading media company with nationwide scale based on high-quality stations with exceptional talent in attractive markets.  Gray and Raycom have highly complementary portfolios of television stations as well as highly complementary company cultures, award-winning journalistic commitments, and long histories of commitments to exceptional community service.  Gray in particular is delighted to announce that, upon the closing, Raycom President and CEO, Pat LaPlatney, will become Gray’s President and Co-Chief Executive Officer.  In addition, Mr. LaPlatney and Raycom’s former President and CEO, Paul McTear, both of whom are currently members of Raycom’s Board of Directors, will join Gray’s Board of Directors.  At that time, Hilton Howell will become Executive Chairman and Co-Chief Executive Officer of Gray.

The transaction is subject to customary closing conditions and regulatory approvals.  The parties expect to close the transaction in the fourth quarter of 2018.

Gray also announced today that, on July 1st, Bob Smith will become its Chief Operating Officer and Nick Waller will become its Chief Administrative Officer.  Currently, Bob and Nick serve as Co-Chief Operating Officers.  In his new role, Bob will oversee station operations and sales operations through the closing of the transaction.  During that period, Nick will oversee human resources, information technology, traffic and CRM systems, capital projects, and performance benchmarking.  Nick also will focus on the transition and integration of pending acquisitions.

As detailed below, Gray and Raycom will host a conference call for all stakeholders and other interested parties beginning at 9:00 a.m. Eastern today to discuss this transaction further.  Additional information about the transaction can be obtained from Gray’s Current Report on Form 8-K being filed with the SEC in connection with the announcement of this transaction, including the investor presentation furnished therewith, which presentation will also be available on Gray’s website. 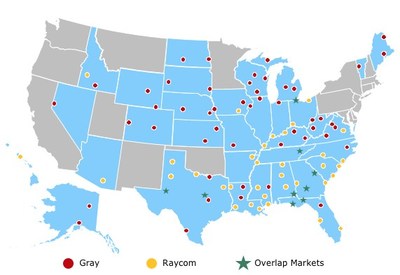 The combination will create a dynamic broadcaster with meaningful scale, significant operating leverage, and a compelling portfolio of high quality assets.  In particular, the combined company will consist of the following broadcast assets, giving effect to all other pending acquisitions by both companies and prior to any divestitures:

In addition to high quality television stations, Gray will acquire several additional Raycom businesses that will result in a more diversified media company. These businesses include:

Raycom has initiated processes to sell or spin off Community Newspaper Holdings, Inc. («CNHI»), which owns community newspapers and information products including over 100 titles located in 23 states, as well as PureCars, a digital ad platform for the automotive industry.  As a result, Gray will not acquire either CNHI or PureCars as part of this transaction.

Excluding CNHI and PureCars, the combined net revenue of both companies on a blended 2016/2017 basis would total approximately $2 billion.

Gray expects that the Raycom transaction will be substantially accretive on a free cash flow per share basis.

Under the terms of the merger agreement between the parties, Gray will acquire Raycom for $3.647 billion in total proceeds, consisting of $3.547 billion in enterprise value and $100 million of Raycom cash.  The consideration will consist of $2.85 billion in cash, $650 million in a new series of preferred stock, and 11.5 million shares of Gray common stock.

Wells Fargo has underwritten the debt financing portion of the transaction in the amount of $2.525 billion.  Gray’s existing Term Loan B and Senior Unsecured Notes will remain in place.  Expected strong free cash flow generation through the closing of all pending transactions and throughout 2018 should allow Gray to deleverage its capital structure following the closing.  Gray anticipates that, assuming a year-end 2018 closing, its total leverage ratio, net of all cash, would approximate 5.0 times trailing eight-quarter operating cash flow, including estimated synergies.

As noted, Gray and Raycom have highly complementary portfolios, and, as such, their combination should create only minimal regulatory issues.  To facilitate prompt approvals and therefore the transaction closing, Gray has elected to divest television stations in each of the nine overlap markets rather than seek regulatory approvals of potentially permissive combinations in certain markets.  Specifically, Gray intends to retain and divest stations in the overlap markets as follows:

Today, Wells Fargo Securities will begin a formal process to market the divestiture stations to qualified third parties.  The divestitures may take the form of cash sales, swaps involving other television stations, or a combination of cash and swaps.  Interested parties should contact Wells Fargo Securities directly and should not contact Gray or Raycom about the divestiture opportunities.  The planned divestiture stations collectively represent less than 4 percent of the operating cash flow of the combined company (excluding CNHI and PureCars).

Based on the foregoing divestiture plan and the lack of other anticipated material regulatory concerns that might arise from the combination, the parties expect to close their transaction following receipt of regulatory and other approvals in the fourth quarter of 2018.

«Today we announce the transformation of Gray Television into a true leader in the broadcast television industry,» said Hilton H. Howell, Jr., Gray’s Chairman, President and CEO.  «Combining our company with the excellent Raycom stations and the superb Raycom employees will create a powerhouse local media operation.  Together, this new portfolio of leading local media outlets will excel at what they do best, which is to provide the local news that local communities trust, the entertainment and sports content that viewers crave, and the incredible reach that advertisers demand.  Indeed, this is a transaction in which there can be no doubt that local community standards will be honored and embraced.  We are excited to welcome the dedicated reporters, account executives, and technologists of Raycom to our growing corporate family.  On behalf of the Board, our employees, and our investors, I convey our deepest gratitude to Jim Ryan and Kevin Latek for leading our efforts on this momentous, transformative transaction.»

«We are thrilled to be joining Gray Television as we share the same core values of journalistic excellence and community service,» said Pat LaPlatney, Raycom Media’s President and CEO. «Together, we will be a stronger, more impactful force for our audiences, advertisers, and communities.  I have tremendous respect for the way Hilton Howell and Gray Television have grown their portfolio with a focus on localism.   I look forward to working alongside Hilton and the wonderfully talented people of Gray Television as the combined entities create an even greater opportunity for growth as a leader in the broadcast industry.  I also want to extend a special thank you to Paul McTear, Becky Sheffield, Ellenann Yelverton and the entire Raycom team for their tireless efforts on this transaction.»

Gray owns and/or operates over 100 television stations across 57 television markets that collectively broadcast over 200 program streams including over 100 channels affiliated with the CBS Network, the NBC Network, the ABC Network and the FOX Network.  Our portfolio includes the number-one and/or number-two ranked television station operations in essentially all of our markets, which collectively cover approximately 10.4 percent of total United States television households. For further information, please visit www.gray.tv.

This press release contains certain forward looking statements that are based largely on Gray’s current expectations and reflect various estimates and assumptions by Gray. These statements are statements other than those of historical fact, and may be identified by words such as «estimates», «expect,» «anticipate,» «will,» «implied,» «assume» and similar expressions. Forward looking statements are subject to certain risks, trends and uncertainties that could cause actual results and achievements to differ materially from those expressed in such forward looking statements. Such risks, trends and uncertainties, which in some instances are beyond Gray’s control, include Gray’s inability to complete its pending acquisition of Raycom, on the terms and within the timeframe currently contemplated, any material regulatory or other unexpected requirements in connection therewith, or the inability to achieve expected synergies therefrom on a timely basis or at all, the impact of recently completed transactions, estimates of future retransmission revenue, future expenses and other future events. Gray is subject to additional risks and uncertainties described in Gray’s quarterly and annual reports filed with the Securities and Exchange Commission from time to time, including in the «Risk Factors,» and management’s discussion and analysis of financial condition and results of operations sections contained therein, which reports are made publicly available via its website, www.gray.tv. Any forward-looking statements in this presentation should be evaluated in light of these important risk factors. This presentation reflects management’s views as of the date hereof. Except to the extent required by applicable law, Gray undertakes no obligation to update or revise any information contained in this presentation beyond the published date, whether as a result of new information, future events or otherwise. 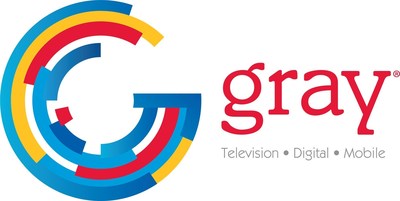