LONDONDERRY, N.H., April 22, 2019 /PRNewswire/ — One year after announcing its commitment to bring about sweeping changes in how communities across the country address the use of toxic pesticides in the outdoor playing fields and community spaces where children, families and pets play, Stonyfield Organic, the country’s leading organic yogurt maker, is announcing several milestones in its StonyFIELDS #PlayFree program. In 2018 Stonyfield Organic kicked off a bold three-year initiative to work with 35 communities across the country to convert outdoor playing fields and parks to organic maintenance, while also igniting a larger movement to ensure that all kids can play freely without the concern of potentially harmful chemicals. Stonyfield Organic has dedicated more than $800,000 to the initiative and progress to date includes: 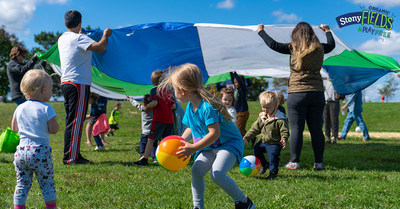 Up next for the initiative, ten additional StonyFIELDS #PlayFree Community Donations of $5,000 will be awarded towards the purchase of organic inputs and/or landscaping equipment needed for organic management, plus in-kind technical support and guidance from expert resources from StonyFIELDS #PlayFree.

«The response to our offers of help in converting local parks and outdoor spaces brings us all hope and optimism,» said Stonyfield Organic’s co-founder and Chief Organic Optimist, Gary Hirshberg. «Once communities witness that there are simple and effective alternatives that don’t have to involve the use of toxic persistent pesticides, parents and city officials are rallying together to make change happen.»

«What’s frustrating is that change can’t happen fast enough. While this past year has been marked with wins – namely several lawsuits that brought to light the link between glyphosate and cancer in both groundskeepers and regular folks just using it on their own lawns – this pesticide is still available in just about every hardware store in America,» continued Hirshberg.

Over 26 million kids play on parks and fields, most of which are managed using a chemical cocktail of herbicides, insecticides, and fungicides, with glyphosate being one of those commonly employed. While huge strides have been made in the organic food space over the past 35 years, less is happening around environmental and health issues specific to the use of pesticides beyond food. In a survey* of parents, Stonyfield Organic found that while most American parents (69%) are looking to lessen exposure to pesticides in food, nearly the same number (67%) do not consider sports fields, playgrounds and parks to be of concern.

«As a parent, I was shocked to learn that glyphosate and other harmful chemicals and pesticides were being sprayed on the Little League fields where my boys played. At first, I just pulled them out of the sport, but I knew I needed to do more,» said Kim Konte, a parent advocate who helped launch Non Toxic Neighborhoods, a grassroots organization which has had a hand in converting 17 cities and six school districts to organic grounds management and is a key partner in the StonyFIELDS #PlayFree initiative.

«This journey has led us to so many inspiring advocates and game changers,» continued Hirshberg. «In the absence of true leadership or intervention from the government agencies that are falling down on the job to watch out for children’s health, we need to all be more aware and make our voices heard on this issue.»

Others lending their voices to the mission include Philip Landrigan, MD, MSc, Founding Director of the Children’s Environmental Health Center at Mount Sinai Hospital in New York and author of the book Children and Environmental Toxins: What Everyone Needs to Know, as well as actor Adam Scott, a concerned dad perhaps best known for his role as Ben Wyatt on television’s Parks and Recreation. Hoping to shed light on the issue, Stonyfield enlisted Scott’s talents for a video called «The Ridiculous New Rules of Soccer,» a humorous look at the serious issue of potentially dangerous chemicals being used on many public parks and fields on which over 26 million kids spend time playing.

Stonyfield aims to empower families everywhere with tools and resources to make change anywhere from their own yard to their local parks. For more information, visit https://www.stonyfield.com/playfree and follow Stonyfield’s progress using the #PlayFree hashtag on social media.

About Stonyfield Organic
As the country’s leading organic yogurt maker, Stonyfield takes care with everything it puts into its products and everything it keeps out. By saying no to toxic persistent pesticides, artificial hormones, antibiotics and GMOs, Stonyfield has been saying yes to healthy food, healthy people, and a healthy planet for 35 years. Stonyfield, a Certified B-Corp, is also helping to protect and preserve the next generation of farmers and families through programs like its Direct Milk Supply and Wolfe’s Neck Organic Training Program as well as StonyFIELDS, a nationwide, multi-year initiative to help keep families free from toxic persistent pesticides in parks and playing fields across the country.

*Stonyfield and Lindberg International surveyed 1,000 adults age 18 and older, comprised of 537 parents with children living at home, in January 2018.